In the 8 April 2015 video report below, Greg Johnson of the Consumer Defense Resource Group criticized a statement by Coca Cola (UK) that claimed there was no connection between sugar consumption and diabetes. (See from 13 minutes 8 seconds until about 15 minutes.)

By April 11 the statement about sugar and diabetes was removed from Coca Cola’s website.

The article below documents the controversy and provides evidence of the statement that has now been removed.

Most of us have had the experience of being in a conversation or discussion with someone and at some point the person responds, “I didn’t say that.”

Consumer advocacy is sometimes like a discussion that criticizes advertising, product labeling, or public statements made by businesses.

Yet, in the Internet age, with less information in print, companies can rewrite their webpages or completely take them down if they are caught making false statements. It’s the same as claiming, “I didn’t say that.” For a consumer advocate, it’s frustrating because you’re constantly dealing with a moving target.

At the time of this writing (12 April 2015), if you do a Google search for diabetes sugar coca cola, the top (non paid) result out of 623,000 is a statement from Coca-Cola about sugar and diabetes as shown below.

“The reason I knew to search on diabetes sugar and Coca-Cola is because I’d seen the claim on their website years ago, and wanted to review it once more for inclusion in my video.” ~ Greg Johnson

These search results will be changing in the near future, because Coca-Cola has now removed their statement on sugar and diabetes. 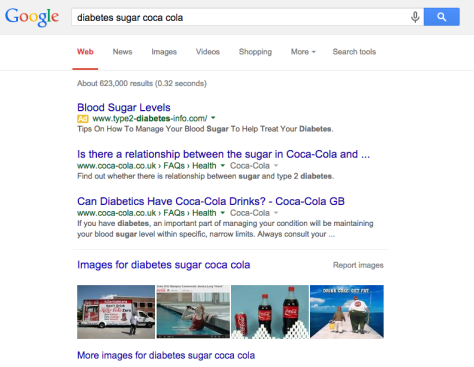 Fortunately, we’ve placed a saved version of the page in PDF format on Scribd, as shown below.

View this document on Scribd

In addition to saving PDF versions and screenshots of web pages, it’s possible to use the Internet Archive service. The screen shot below is from the archived page as it’s existed for several years up until this week when it was taken down. This screen shot dates back to October 2013. Other more recent screenshots are also available.

Coca-Cola’s Statement on Sugar and Diabetes

Below is Coca-Cola’s present statement on the link between the sugar in their products and diabetes.

Yep, as you noticed, they’ve taken it down. No apology. No revision. No public statement. No forwarding link to more information. Nothing. To their credit, at least the document that had been there for several years directed consumers to the American Diabetes Association website.

Presumably the powers that be at Coca-Cola later decided that the American Diabetes Association might not be a resources they’d want their existing and potential customers to know about. Maybe they are worried about sugar being the next tobacco, along with the health risk and legal implications that go along with it. 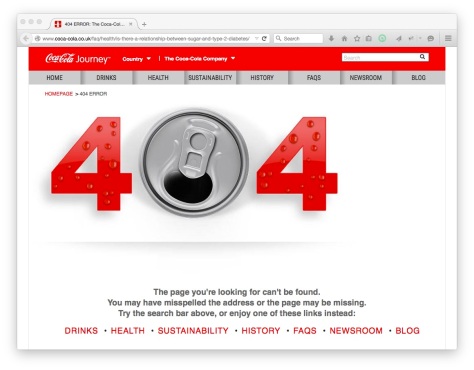 Sometimes in consumer advocacy work, we are able to engage in a discussion with representatives of a company. This helps document the process, and demonstrate that our work is having an impact. However, there are circumstances where a company won’t comment, won’t respond, and won’t acknowledge that any problem exists or existed. This is to avoid any appearance of fault or legal liability. Because of the huge sugar related lawsuits that may be looming on the horizon, it’s not surprising that Coca-Cola quietly took down their webpage and isn’t going on record about any of what you’ve just read.